https://today.oregonstate.edu/news/harm-blue-light-exposure-increases-age-oregon-state-university-research-suggests
Posted by John Coffey at 7:13 AM No comments: 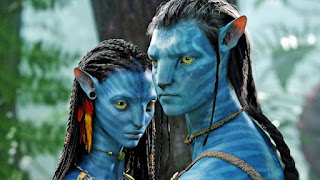 "Avatar" is a science fiction epic directed by James Cameron and released in 2009. The movie tells the story of Jake Sully, a disabled former Marine who is sent to the distant planet of Pandora to participate in a corporate-funded project to mine a valuable mineral called unobtanium. While there, Jake falls in love with the native Pandora inhabitants, the Na'vi, and becomes torn between his loyalty to his human employers and his growing connection to the Pandora ecosystem and its inhabitants.

One of the standout elements of "Avatar" is its groundbreaking visuals and special effects, which were groundbreaking at the time of its release and hold up well even by today's standards. The use of motion capture technology and 3D animation allowed the filmmakers to create fully-realized, lifelike characters and breathtakingly realistic environments that are a joy to behold. The movie's action scenes are also well-choreographed and exciting, with impressive set pieces that showcase the unique creatures and landscapes of Pandora.

The story of "Avatar" is not particularly original, with elements of the "white savior" trope and a simplistic, good-versus-evil narrative that pits the human characters against the Na'vi. However, the movie's themes of environmentalism and cultural imperialism are timely and thought-provoking, and the performances of the cast, particularly Sam Worthington as Jake and Zoe Saldana as the Na'vi warrior Neytiri, are strong.

Overall, "Avatar" is a visually stunning and entertaining action adventure that is worth seeing for its groundbreaking special effects and strong performances. While its story may be somewhat simplistic and familiar, the movie's themes and visuals more than make up for it.
--
Best wishes,

P.S.  I didn't write this review.  An AI called chatGPT did.
https://openai.com/blog/chatgpt/

Posted by John Coffey at 1:32 PM No comments:

What It's Like To be a Computer: An Interview with GPT-3

There is this thing called the Turing Test, invented by Alan Turing seventy years ago.  The idea is to see if a computer could become smart enough to fool a human into thinking he is talking to a real person.  We have crossed a threshold where computers have almost reached this point.
https://www.youtube.com/watch?v=PqbB07n_uQ4
The AI appears to understand more than it actually does.  It has studied human conversation and a mountain of raw information so that it can imitate a human conversation.
However, having a conversational computer isn't the only threshold the machines have crossed recently.  Computer AI has become much more useful, performing all kinds of new tasks, such as surgery or writing computer code.  By the end of the decade, machines will be performing many more jobs.  It is very likely that in the next couple of decades, or even in this one, we will have general-purpose robots that could perform any task that we want them to do.
Posted by John Coffey at 12:34 PM No comments:

The Current State of Windows on ARM-Architecture (& Its Promising Future)

The industry is moving toward efficient ARM processors, in an effort to catch up to Apple.
https://www.youtube.com/watch?v=psbucvxF-UU&t=468s
This video is talking about a future processor.  I saw another video claiming that Microsoft's current ARM-based devices fall way short of what Apple's M-series chips can do.
Although the video claims that there is no problem running X86 programs on ARM processors using emulation (https://youtu.be/psbucvxF-UU?t=195), reportedly many videogames have difficulty or don't work at all under emulation.  However, if we are moving toward two competing hardware architectures, I hope that many software makers will compile their software to work on both platforms.  For video games, it can be more complicated because the GPU hardware can be different.
I don't think that Intel will stand still as their processors get out-competed.  All they would need to do is come up with more powerful processors to recapture the market.  They also are planning to come out with 3-nanometer chips in a couple of years.
However, ARM's main strength is power efficiency, so it will remain popular on portable devices.
According to one video, the industry is moving away from PCs as we know them today, and toward System on a Chip devices like what Apple has done.  Although these tend to be more efficient, you can't change the hardware configuration, like the memory size, after you buy them.
Posted by John Coffey at 9:51 PM No comments:

https://www.youtube.com/shorts/Tfg9mNi5Z6o
Posted by John Coffey at 2:08 PM No comments: