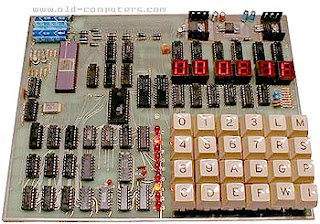 I was fortunate that I got interested in computers really early, back in 1975, which was a couple of years before computers like the Apple II, Commodore Pet, and TRS-80 came out.  I was also fortunate that someone I met lent me a computer that he had built from a kit, which was an RCA Elf.  This computer was so primitive and had so little memory, only a quarter K of RAM, that you had to program it with a calculator-like keypad inserting numerical instructions into specific memory locations.  I was able to master this just enough to get a working knowledge of machine code programming.
There was a saying going back to this time period that if you knew how to program in machine code then you had a much deeper understanding of how computers work.  I learned several machine languages, and this proved very useful to me in getting jobs in the video game industry and being able to do those jobs.  When I went to work for Xanterra in 1999 to do Gameboy Color programming, I sort of hit the ground running because I already knew how to program Z80s, which I had learned in the 1970s.  The owner of the company was impressed enough with my skills that he gave me a raise after my first week.
https://www.youtube.com/watch?v=HWpi9n2H3kE
Posted by John Coffey at 4:31 PM No comments:

https://www.youtube.com/watch?v=O_WbmIIy4vk
If you have a good smartphone, a tablet feels unnecessary.
The last thing I need is a tablet that is 2.5 times faster than my desktop computer.  This is the kind of power you want on a laptop or a desktop.
The M1 is only 7% slower than the M2.
A couple of years ago, I bought the Amazon Fire tablet on Black Friday for $80, which is not a powerful tablet, but it works just fine as a portable Internet and streaming device.
Posted by John Coffey at 7:02 PM No comments:

https://www.youtube.com/watch?v=dL9U6n4IixQ
I did some experimenting on my computer by playing video games and videos at resolutions from 720P up to 5K. With my eyesight, which is about 20/30, on a 27-inch screen, I could not tell a difference between 1080P and higher. We are talking about levels of detail that are hard to perceive. I personally like 1440P, not that it was really an improvement over 1080P. It is maybe for me more psychological that I think that 1440P is better.
Even if you have 20/20 vision and a 60-inch screen, you are going to be sitting further back, whereas I sit very close to my 27-inch screen. Can people really tell a difference with 4K on a big-screen TV?
Many years ago somebody made a video about how 4K was unnecessary because the resolution of the human eye was not going to tell the difference. If it is unnecessary on a 55-inch TV, then it is probably unnecessary on a smartphone. I bought an iPhone 10R, which has a sub-1080P resolution, yet I never notice the resolution being too coarse.
Posted by John Coffey at 6:37 PM No comments: 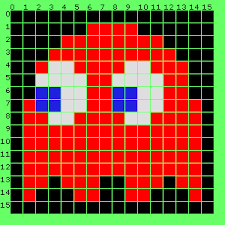 The word "sprite" is interesting. It means elf, fairy, or ghost, although it can also refer to flashes of different color lights in clouds caused by lightning. The word originated in the middle ages from the word "spirit". When I hear the word, I think of the Disney character Tinkerbell.
In computers and video games, a sprite is an image that can move on top of a background. Usually, these are 2D objects moving on top of a 2D background, although a game like the original Doom had 2D objects moving on top of a 3D background. The mouse pointer on a computer screen is technically a sprite.

Back in the days when computers and video games were 8-bit and 16-bit, it was helpful to have hardware support for sprites, which allowed graphical objects to move around independently of the background. The reason this was helpful was that it was more taxing for the old slow computers without hardware sprites to manipulate the graphics on the screen. When I was writing games for the Timex Sinclair 2068 and Atari ST computers, I had to write software to make all the graphics move because there was no hardware support for sprites, which makes the task more technically challenging.
The early arcade video games used hardware sprites and so did all early home video game consoles. The sprites on the Atari 2600 are extremely primitive and very difficult to program, but the programmers knew how to make them work.
Many people have touted the Commodore 64 as the best 8-bit computer because it had hardware support for eight 8x8 sprites, although this is not very many compared to the Nintendo Entertainment System that came out later. I think that the Atari 8-bit computer had better graphical capabilities overall.
Once we had 32-bit processors, there was no longer a need for hardware sprites. These systems were powerful enough that it was not a huge challenge to manipulate graphics on a screen. Also, with 32-bit systems, there was a greater emphasis on 3D graphics instead of 2D graphics.

http://www.entertainmentjourney.com
Posted by John Coffey at 3:05 PM No comments:

https://www.youtube.com/watch?v=7J7X7aZvMXQ
Posted by John Coffey at 11:43 AM No comments: