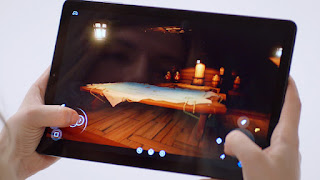 Roughly 32 years ago I had an argument with a coworker.  He argued that once internet speeds became fast enough to transmit full-screen video, we wouldn't need game consoles, since we would be able to stream video games from a server to our computer screens.  Rather than pay for expensive hardware, that hardware could be on a server someplace, saving us money.
I have to admit that he had remarkable foresight literally 30 years ahead of his time.  This was at a time when the Internet was text only.  However, I saw a number of problems with his idea...
1.  Internet speeds were still fairly low, like 1,200 to 2,400 bits per second.
2.  Latency is always an issue when playing games.  No matter fast your Internet is, there is an overhead to transmitting data back and forth.
3.  It is always advantageous to have your own hardware.  Imagine having to share hardware with other people competing for the same physical resources.  I figured that hardware would get cheaper over time, eliminating the need to share hardware with other people.
4.  His idea reminded me of the early days of computing where you would have to dial into a mainframe using a dumb terminal, one of which I actually owned and used at the time, whereas the new trend in computing was for everyone to have their own computer.
I argued that streaming video games would never be practical.  He couldn't understand why I didn't see the obvious wisdom of his idea.
Two years ago Google introduced Stadia, which was a video game streaming service, and it totally flopped.  Other companies like Microsoft and Amazon are working on the same idea, but they all suffer from the same problems like latency.
It makes very little sense to be dependent on unreliable Internet communication and shared hardware to play games when you can purchase a video game console like the Xbox Series X for $500.  Putting hardware in a centralized location instead of your living room isn't necessarily cheaper, except that you can share that hardware with other people, but what if you all want to use the hardware at the same time?
In theory, this could become practical someday, but the same technology that will make this more feasible will also make it more feasible for you to have your own hardware that is just as good.  This is the problem I saw three decades ago.
Posted by John Coffey at 8:11 PM No comments:

Apple Store vs. Repair Shop: What the Right to Repair Is All About

https://www.youtube.com/watch?v=0NCjoUx-KLI
Posted by John Coffey at 5:50 PM No comments:

How THIS wallpaper kills your phone.

https://www.youtube.com/watch?v=iXKvwPjCGnY
Posted by John Coffey at 5:42 PM No comments:

How are we going to do this?

He is getting faster internet across 6 kilometers of water than what I get across my family room.
I'm running a 5 GHZ wi-fi router, which is around double the frequency of your microwave oven, probably at 100 milliwatts.  He is running a 60 GHz transmitter, which is very high microwaves, at an unknown power.
https://www.youtube.com/watch?v=9T98VsMe3oo
https://www.amazon.com/Ubiquiti-airFiber-System-Throughput-AF60-US/dp/B08PBDSGNV/ref=sr_1_1
My mother and step-dad couldn't get internet to work 3 miles outside of North Vernon, Indiana, using Verizon Wireless as the provider.  Fortunately, they now have fiber internet, although at a low speed of 4 to 5 Mbs.
Posted by John Coffey at 5:19 PM No comments:

The bottom line is that the Unreal Engine allows massively detailed images to be generated in real-time for either games, or like on The Mandalorian TV series where they use a dome with screens on all sides to generate the environment for the actors to act in.  (https://techcrunch.com/2020/02/20/how-the-mandalorian-and-ilm-invisibly-reinvented-film-and-tv-production/)
https://www.youtube.com/watch?v=47I2N_l47mw
The first version of the Unreal Engine was used to make a videogame in the late '90s called "Unreal".  I played this game.  By today's standards, it was very crude, but it was actually a step up from what we were used to at the time.
Posted by John Coffey at 9:52 PM No comments:

This guy has a PROBLEM - Tech Hoarders

I found this amusing because I have been around for a long time.
https://youtu.be/hiLlNzxDfAg
Posted by John Coffey at 10:00 PM No comments:

An honest conversation on Apple, hashing, & privacy with Daniel Smullen

https://youtu.be/9ZZ5erGSKgs
How is Apple examining the data on my phone any different than Wiretapping?
It is a federal crime to wiretap or to use a machine to capture the communications of others without court approval, unless one of the parties has given their prior consent. It is likewise a federal crime to use or disclose any information acquired by illegal wiretapping or electronic eavesdropping.
https://www.justia.com/50-state-surveys/recording-phone-calls-and-conversations/#:~:text=It%20is%20illegal%20to%20record%20or%20intercept%20any%20telephone%20or,to%20address%20in%2Dperson%20conversations.
Posted by John Coffey at 9:18 PM No comments:

Apple is about to start scanning iPhone users' devices for banned content, warns professor • The Register

https://www.theregister.com/2021/08/05/apple_csam_scanning/?td=keepreading-btm
Apple claims to protect its customer's privacy.  Regardles of how good the cause is, I don't want them looking at my photographs.  It also shouldn't be their job to act as police.
Posted by John Coffey at 8:24 PM No comments: